Your chance to win!

We over at Applause Books have partnered  with Erie Gay News to give away a copy two of our books. From November 17 to December 8 you have a chance to enter to win Mark Clark’s book, Star Wars FAQ. And starting today you can enter for a chance to win A Chorus Line FAQ by Tom Rowan! The contest for A Chorus Line FAQ ends on Friday, December 11, 2015 so make sure to enter before it’s too late! 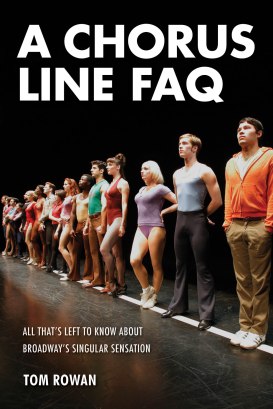 The ultimate treasure trove of information, A Chorus Line FAQ presents history and fun facts, including: the unique workshop process through which the show was developed and written, the stories of its creators, the record-breaking Broadway run and numerous touring productions, and the captivating movie version. The book also features all-new chapters on the Broadway revival, the two London productions, and notable regional productions around the country. In addition to a chapter on A Chorus Line cultural history – with a guide to all the pop cultural references in the show – the book includes extensive photos as well as biographical information on the casts of the major productions. There are also chapters on recordings, previous books on the topic, and the landmark show’s influence on subsequent Broadway musicals and films. 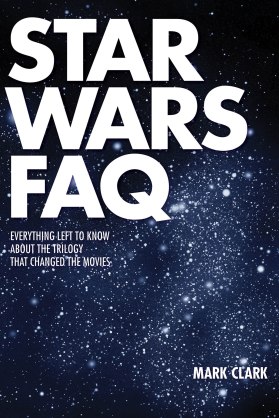 In his foreword to Star Wars FAQ Everything Left to Know About the Trilogy That Changed the Movies, Alan Dean Foster, critically acclaimed author of more than a hundred science fiction and fantasy novels, sums up what the Star Wars FAQ is all about: “Reading a book like Star Wars FAQ is a bit like strolling the streets of London without a guidebook. You know where Big Ben is, but stumbling across the first public drinking fountain in Britain is apt, in its own more modest way, to be even more enchanting.”

Star Wars FAQ offers an original analysis of the series’ enduring appeal and cultural impact. In the process, author Mark Clark tells a story as thrilling and action-packed as the movies themselves, with bold characters facing apparently insurmountable odds.

Facts about A Chorus Line FAQ

Masterworks Broadway recently reviewed Tom Rowan’s book A Chorus Line FAQ. While this is an FAQ book, Peter Filichia points out that Rowan doesn’t set it up as a simple question and answer book. Instead Rowan “gives a straightforward account of how one of the most beloved of Broadway musicals got started and succeeded.” To celebrate the musical’s 40th anniversary, Filichia soured A Chorus Line FAQ, for 40 fun facts…

In honor of the show’s fortieth anniversary, here are the forty facts from A Chorus Line FAQ that most interested me:

Read the rest of the facts over at Masterworks Broadway!

When September rolls around, there are always new Broadway shows right behind it.  Applause Books is celebrating the new Broadway season — and one of the most popular and successful musicals of all time — with A Chorus Line FAQ by Tom Rowan.  Here’s an excerpt from Tom’s introduction!

A Chorus Line is, arguably, the most popular and successful American musical of all time. It opened in 1975 and won nine Tony Awards, the Pulitzer Prize for Drama, and a slew of other awards. In 1983, it broke the record as the longest-running show in Broadway history: a distinction it held for fourteen years. Ten different touring companies have crisscrossed the nation, and the show has been translated into over twenty languages and produced all over the world. A hit Broadway revival in 2006, which ran for two years, and its subsequent tours revived interest in the show, and today it is nearly always onstage somewhere, in regional theatres, summer stock venues, dinner theatres, community theatres, high schools, and colleges.
What is the appeal of this unique musical, and how has it so thoroughly captured, and held, the imagination of the American public?
The show plays directly into dreams and values that are deeply rooted in the American psyche. The idea of an audition, a competition, a group of people risking it all for a job—to prove they’re the best—has long been a central trope in our culture. It’s one of the reasons Americans are so obsessed with sports, or beauty pageants. Baayork Lee has referred to A Chorus Line as “the first reality show,” and indeed, the explosion in the 1990s and 2000s of competition-based reality TV programs fed into that same American obsession with Cinderella stories: the every man putting himself on the line for a chance at a dream, being judged a winner or a loser. Anyone who’s ever gone on a job interview can identify with the auditionees fighting for an opportunity to do what they love—and let’s admit it, once in a while we all like, if only vicariously, to be the judge as well, the one actually making the selections. A Chorus Line gave us a chance to root for the underdog, to choose our favorites, and then hold our breath till we found out who got the job—and weep for those who didn’t. Current television shows like American Idol, The Voice, America’s Got Talent, Dancing with the Stars, and so forth satisfy those same deep-seated needs. There have even been a few (such as the British How Do You Solve a Problem Like Maria? and the American Grease: You’re the One That I Want!) where the prize was an actual role in a West End or Broadway musical!
A closer look, though, reveals that A Chorus Line is something subtler, something deeper than this, perhaps even slyly subversive. Dancers in the show have expressed indignation at the existence of programs like You’re the One That I Want!; the implication that anybody off the street could be a Broadway star seems to negate the years of discipline and self-sacrifice and grueling, expensive training real dancers commit to in pursuit of their goals. And after all, the seventeen auditionees standing on that white line are not competing for a shot at stardom or celebrity; as the show’s finale makes startlingly clear, they are asking for a chanceto dance in a uniform, anonymous kick line behind a star. It’s love of the work itself that drives them, not any misplaced desire for wealth (which won’t be forthcoming in any case) or the proverbial fifteen minutes of fame. Somewhere in there can perhaps be seen a metaphorical critique of the American dream: do we chase success by competing to be as much like everybody else as possible?