Today marks the first day of the 2014 Lucille Ball Comedy Festival in Jamestown, NY! The festival, which is designed to showcase the best in the comedy biz, will feature acts such as Lucie Arnaz, Jay Leno, and Tom Cotter. James Sheridan, author of the Lucille Ball FAQ will also be there to sign copies and to give his expert opinion on America’s favorite redhead. Below, James tells us a bit about the history of the festival and what to expect. We hope you all have your tickets! 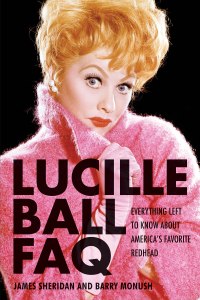 Comedy will commence in Jamestown, New York. Lucille Ball spent her formative years in Jamestown and this was evident in her work. Her long running sitcom characters Lucy Ricardo, Lucy Carmichael, and Lucy Carter all hailed from Jamestown and there were many references to the city, its surroundings, and its inhabitants throughout the years. For instance, nearly every woman in Lucy Ricardo’s women’s club on I Love Lucy was named after a citizen of Jamestown who Lucy knew in her youth. Since Lucille Ball was described as Jamestown’s greatest export, it was only natural they would honor her in some way.

In the late 1980s, the city approached Lucy about hosting a festival for new comedy in her honor. Lucy loved the idea of promoting rising young comedians, but passed away one month before she was scheduled to attend the first such event in May of 1989. The festival officially launched in two years later with Lucy’s daughter, Lucie Arnaz, as guest of honor. The festival expanded, but with the opening of the Lucy – Desi Museum in 1996, its focus became more about Lucy and less on comedy. In the past few of years, the event has struck a happy medium by going back to the original idea of promoting comedy that pleased Lucy so much, but with enough Lucy themed events to enthrall the hundreds of fans who attend every year. A Comedy Hall of Fame is currently in the planning stages.

This year’s festival will feature Lucie Arnaz, Jay Leno, Caroline Rhea, and America’s Got Talent finalist Tom Cotter. I will be on hand to sign copies of Lucille Ball FAQ: Everything Left to Know About America’s Favorite Redhead. Events will include a Lucille Ball fashion show hosted by costume designer Ret Turner, an I Love Lucy trivia contest, a masquerade ball, and various screenings of Lucy programs. Hundreds of fans from all over the world are expected for the five days of events, which is sure to be a laugh riot.