The following is an excerpt from Mr. Broadway: The Inside Story of the Shuberts, the Shows, and the Stars by the late Gerald Schoenfeld. This is the foreword, written by Hugh Jackman. 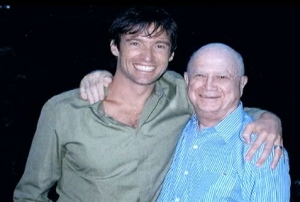 Jackman and Schoenfeld, photo as printed in the book Mr. Broadway

When people meet me, usually their lasting impression is of my wife . . . after all, she is in my opinion far funnier, more interesting, and definitely sexier! The type of person who turns heads in whichever room she is in. . . .Well, I have to say my first memory of meeting Mr. Schoenfeld was a little similar. It was at a fancy London hotel off Hyde Park, I was with my good friends Ben Gannon and Robert Fox, the producers of The Boy from Oz, and we were going to tell him of our plan to bring the show to Broadway. It was around six p.m., and Mr. Schoenfeld had plans to go to the theater, so we were going to shake hands before they went to the show.

I was surprised when we went into the hotel that we went straight up to the room. I thought we might have met in the lobby, but no . . . Jerry was always authentic and down-to-earth, and—as I would say to him later during our decade of friendship—he was to me an honorary Australian . . . a man of old-fashioned values, where a handshake was stronger than any contract.

Jerry welcomed us not as the titan of Broadway, as he had been described to me, but in a very warm, genial, and up-front way. “Nice to meet you, Mr. Schoenfeld.” “Please call me Jerry. . . .Very nice to meet you, You”—Jerry always pronounced my name without the H… like a lot of genuine New Yorkers!—then straightaway said, “So . . . I know you are in movies, so are you really coming to Broadway with this show or what?”

Jerry always was to the point, and for the next ten years would say to me something similar: “Enough of all this movie shit, when are you coming home—when are you coming back to Broadway?” I told him yes, we shook hands . . . apparently that was it, it was done, then barely two minutes into our meeting, Pat came into the room wearing her bathrobe: “Jerry, have you seen my. . .”And I can’t remember the rest of the conversation. I immediately remembered I was in someone’s hotel room, and Pat didn’t blink an eyelid.We shook hands, I apologized for being there, and she told us to sit and relax, and I wondered how often things like this might have happened. For Pat it all seemed very normal. And like my wife, as big a personality as Jerry was, Pat somehow had that ability to turn heads effortlessly.

From that moment I knew we were going to be friends. I liked them both instantly, and very soon after, like would turn to love. Pat and Jerry invited me and my family to spend weekends with them upstate, we would go to the theater together, to restaurants, and all along I had that feeling that Jerry was not like a king but more like a father and brother all rolled into one.

The year I spent on Broadway doing The Boy from Oz was one of the greatest years of my life, with so many extraordinary memories. But one of my lasting impressions is the visits I would get from Jerry. Sometimes it would be just before I went onstage: “You,” Jerry in a very loud stage whisper would say, “I need to talk to you about something.” “Jerry, I am just about to go onstage.” “I know—it won’t take a second”. . . always made me laugh. But then, during the last song of the show, “Once Before I Go”, two to three times a week I would look out to the wings and there Jerry would be, a lover of the theater and one of the greatest supporters I have ever had. He told me how much he loved the show. . .maybe it was the resonance of the show’s themes of someone living their dreams, someone living life to the full, of having no regrets of the road traveled. And to me that was Jerry. Right up to his death Jerry was working . . .well, not that it was work to him. The theater was his domain, his church, his home. Talking to me about shows, sending me possible scripts for new shows, revivals . . . whatever.

The last night of Jerry’s life, Pat and he came to the premiere of my movie Australia. He came and grabbed me after the movie was over, upset that Pat thought it not a good idea to go to the after party, and said, “Very good, You . . . now enough of this movie business, when are you coming back home . . . to Broadway?” It would be only nine months later, in a show called A Steady Rain, with Daniel Craig . . . a fourteen-week run, and in which theater? The Schoenfeld, of course!

I can’t wait to read this book. I knew Jerry for only ten years. He changed my life in so many ways; now it is really time for me to learn about the other seventy years. Thank you, Pat, for making this book happen . . . and secretly I will always picture you working on it … in your bathrobe!

Mr. Broadway was completed just one month before Gerald Schoenfeld’s death in 2008 at the age of 84. Bringing the reader backstage, the long-term chairman of the Shubert Organization shares his triumphs and failures, sings praise, and settles scores. He recounts nightmarish tales of the Shuberts, themselves – the meanness of Lee, the madness of JJ, the turmoil surrounding John’s personal life, and the drunken ineptitude of Lawrence Shubert Lawrence, Jr., the man who succeeded them and nearly brought the Shubert legacy to an ignominious end.