Now for the first time, The Recording Academy and Hal Leonard Books have collected two decades of Special Merit Award honoree tributes in A GRAMMY Salute To Music Legends. A GRAMMY Salute To Music Legends edited by David Konjoyan, offers a glimpse into how artists are personally affected by other artists, and the debt of gratitude, influence and inspiration they owe each other.  Take a look at the book trailer below. 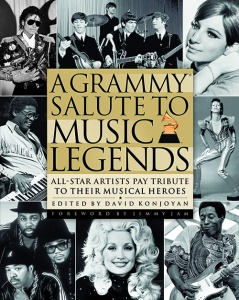 The 87 honorees featured in A GRAMMY Salute To Music Legends have made extraordinary contributions to blues, classical, country, R&B, rock, rap and other forms of music either as performers or behind the scenes as producers, engineers, songwriters, executives or technical innovators. The collected tributes are sometimes touching, sometimes humorous and always inspiring.

Editor David Konjoyan writes in his introduction: “As with other innovations, whether science-, technology-, or business-related, none happen in a vacuum and all have deep reverberations. That’s what this book is all about: the sources of those reverberations and the revelations of those who were impacted by them and filtered them into their own groundbreaking work.”

In some cases, the relationship between the writer and legend is obvious (Quincy Jones honoring Michael Jackson or Miranda Lambert writing about Dolly Parton); in others the influence is perhaps surprising (Queen’s Brian May paying tribute to Doris Day or Steven Van Zandt writing about Dean Martin). Sometimes the reverberations transcend music entirely, as when Sen. Patrick Leahy writes about his friendship with the Grateful Dead. Additional honorees highlighted in the collection include The Beatles; David Bowie; Earth, Wind & Fire; Leonard Cohen; Carole King; Barbra Streisand; and Run DMC.

DAVID KONJOYAN is the Vice President of Creative Services at The Recording Academy. In 2007 he edited And the GRAMMY Goes To…, a coffee-table book celebrating 50 years of the GRAMMY Awards. He has worked as a music journalist and in radio promotion and public relations and has developed and executive-produced two albums: 1994’s tribute to Karen and Richard Carpenter, If I Were a Carpenter, and the offbeat nod to the neo-lounge movement, Lounge-A-Palooza, in 1997. He lives in Los Angeles.