The following is an excerpt from UFO FAQ by David J. Hogan discussing Incubi and Succubi 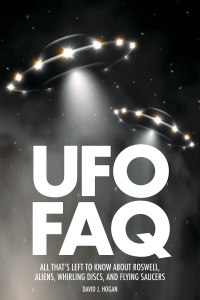 Alien abduction inevitably encourages conjecture about extraterrestrial interest in human sexual behavior. Ordinary criminal abduction is an intimate crime: abductors manhandle their victims, deprive them of their liberty, and force them to submit to an unsympathetic agenda. Alien abduction heightens the intimacy factor, particularly insofar as the victim endures confinement to a small, peculiar area (a ship) and is at the mercy of “strange” captors with an interest in the design and functions of the human body.

In this, sexual study and abuse during alien abduction exists in the realm of the scarily fabulous, rather like those regularly reported outbreaks of shrinking and disappearing male genitals in Africa and Asia. Societies the world over preserve venerable tales of rapacious ghosts, goblins, and demons. But the awfulness of alien abduction is unimaginable to those that have avoided it. The shock forces some victims into mortified silence, but moves others to shout warnings. As tales of alien sexual terror spread, the numbers of reported incidents rise. Many among the general public scoff at such claims, and sometimes, even sympathetic sources have their fill of alien sex, and go for all-out sendup, as Fortean Times magazine did in May 1999, by devoting its cover to “ALIEN SEX: Probing Close Encounters of the Intimate Kind.” An illustrated sidebar discusses “Alien Voyeurs.” A call-out deck on one page reads “For a three year period[,] they stretched his penis each night.” 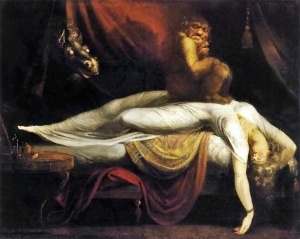 Abductees often report that sexual abuse happened while their minds were in an induced twilight state, or during sleep. A scenario in which a human intruder enters a bedroom through an unlocked window and ravages a sleeping victim is familiar enough, and justifiably distressing to contemplate, for it combines rape with “night terrors.” The Nightmare, a famed 1781 painting by John Henry Fuseli, conflates all of that into the mythic incubus that has (or is about to) sexually abuse a sleeping woman in her bedchamber. Fuseli’s blocky, humpbacked incubus is perched on the midsection of an unconscious young woman who epitomizes the Western feminine ideal of long limbs, golden hair, and creamy skin. (Le Cauchemar [The Nightmare], a marble sculpture completed by Eug.ne Thivier in 1894, brings the incubus/sleeping nude situation to unnerving dimensionality. And Reynold Brown’s poster art for a 1964 horror film, The Night Walker, directly references Fuseli.)

A similarly unwelcome sense of the sexually preoccupied “other” dominates numberless depictions of succubi, the female counterparts of incubi. Like an incubus the succubus dedicates herself to forced sexual intercourse. The victim is male, and he’s no more pleased about the violation than the victim of an incubus. 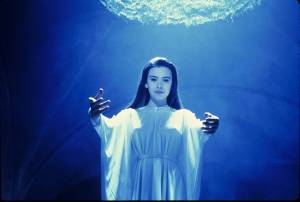 Mathilda May, playing the sinister extraterrestrial succubus disguised as a human woman in Tobe Hoopers demented and marvelous Lifeforce (1985).

Whether incubus or succubus, these are creatures with frightening, distinctly nonhuman faces and bodies. Batlike wings are common accessories; likewise elongated ears, fangs, goats’ or rams’ horns, hooves instead of feet, and sometimes a tail. (Incubi/succubi images from the late 20th century and after are usually blends of Outsider Art and the pin-up aesthetic, with succubi in traditional girlie poses.) Whatever the gender of violator and victim, the incubus/succubus depictions are akin to scenarios of sexualized alien abduction. And whether mythic or UFO-based, the situations reflect the common fear of sleep, and the even more frightening phenomenon of sleep paralysis, by which the victim can neither awaken nor resist.

Rape is an unconscionable violation. In some quarters, this kind of alien behavior is explained in the blunt terms of breeding (either as experimentation or as part of a vast, concerted effort to create a human-alien hybrid race). To some other observers, though, the alien violations suggest some not-unreasonable questions.

Are sexually aggressive aliens plain criminals? Practical jokers? Imps of the perverse? Shape-shifters? (To clarify: just how does alien equipment adapt itself to human bodies?)

Might extraterrestrials have long ago inspired the incubus and succubus figures of folklore and dreams?

UFO FAQ is an all-inclusive guide to UFO lore – hard science and hoaxes, sightings and abductions, noted UFO proponents and skeptics, and sanctioned research and purported government cover-ups. Readers will meet cultists and explore worldwide UFO “hot spots.” They’ll learn about UFOs in World War II, the Cold War, and the age of terrorism. And they’ll zip along with UFOs in movies, comics, TV, and other popular media.