← Interview with David Bushman & Arthur Smith
50th anniversary of one of the Beatles last tour show! →

With record sales of nearly 32 million in the United States and an estimated 60 million worldwide and with no end in sight, Pearl Jam can stake its claim to being the most successful, enduring, and influential band to emerge from the Seattle (or pretty much anywhere else) in the 1990s.

In Pearl Jam FAQ: All That’s Left to Know About Seattle’s Most Enduring Band (May 2016, Backbeat Books, $19.99), authors Thomas Edward Harkins and Bernard M. Corbett explore the entire arc of the band’s career, from their pre-Pearl Jam days to the present. Each of 30 chapters explores a different aspect of Pearl Jam’s fascinating history.

Pearl Jam FAQ looks the band members’ successes, failures, and tragedies prior to joining forces, as well as their early days as Mookie Blaylock and the unusual manner in which they came up with the name finally stuck. Then, Harkins and Corbett go inside the studio and analyze each of their albums in turn and hit the road with them as they set out to conquer Seattle, the West Coast of the United States, and then the entire world.

Beyond the music, Pearl Jam FAQ takes a long look at the way Pearl Jam adapted to an ever-changing media landscape where MTV, not radio, is the major power broker. The book also addresses their battles with Ticketmaster and explores about the roots of their socio-political activism.

With a view of the band from every angle and in every context – on CD, on vinyl, on the radio, on television, on film, in videos, onstage, backstage, on the road, in the air, and at home – through the eyes of Pearl Jam enthusiasts, Pearl Jam FAQ presents a must-have text for band devotees to devour.

THOMAS EDWARD HARKINS is a media ecologist and former adjunct professor who spent ten years teaching undergraduates at NYU’s Steinhardt Department of Media, Culture, and Communication, and a year at Adelphi University. The two-(nearly three!)-time New York University alumnus now works as a freelance writer and editor in his native Brooklyn. Rock ’n’ roll is his abiding passion.

BERNARD M. CORBETT is the radio voice of Harvard University football and Boston University hockey. The Massachusetts native and Boston University alumnus is the author of nearly 20 books, most of them dealing with sports and rock ’n’ roll. The music historian has worked with the late, legendary NYC DJ Pete Fornatale on books about Woodstock and the Rolling Stones. He lives in Boston. 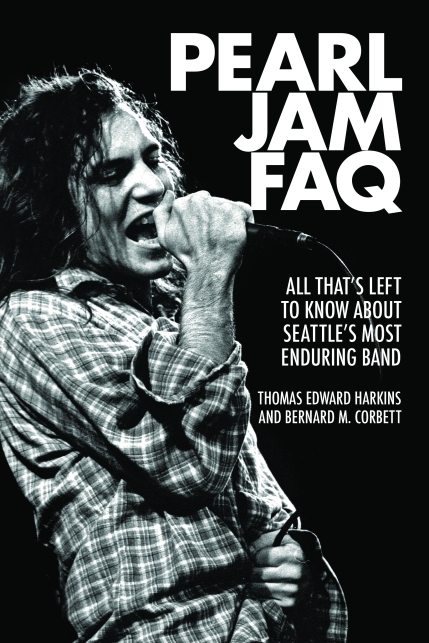 ← Interview with David Bushman & Arthur Smith
50th anniversary of one of the Beatles last tour show! →