Authors of Twin Peaks FAQ, David Bushman and Arthur Smith, have written a jam packed book full of facts for both veterans and new comers of the show Twin Peaks. With Twin Peaks return to television slowly approaching, now is the perfect time to catch up on all things Twin Peaks related with Twin Peaks FAQ. Courtesy of io9 Gizmodo, below are some facts that diehards of the show may not have been aware of, such as… 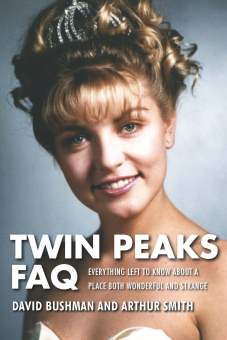 1) The Twin Peaks actually have names

According to a Lynch-drawn map, they are White Tail Mountain and Blue Pine Mountain—though the actual peaks glimpsed in the show comprise Mount Si in North Bend, Washington, where many of the exteriors were filmed.

Lynch and his Twin Peaks co-creator, Mark Frost, first intended their mystery to unfold amid the isolation of the Great Plains, but abandoned that idea after realizing evergreen forests would offer a more mysterious visual backdrop than barren prairies.

How have I never noticed this before?

And one who’d worked with David Lynch and Kyle MacLachlan before: Isabella Rossellini. Joan Chen ended up playing the femme fatale role instead. (Page 83)

Agent Cooper’s former partner arrives in town late in Season Two, and he was modeled by Arthur Conan Doyle fan Mark Frost after Sherlock Holmes’ nemesis, Professor Moriarty. But Lynch “reportedly found the character unsubtle and uninteresting,” and rewrote a lot of the finale to replace Earle with Bob in the final clash with Cooper.

6) This is David Lynch’s favorite song

It’s “Song to the Siren,” by Tim Buckley. It’s mentioned by the authors because when Lynch was unable to secure the song’s use in Blue Velvet, he collaborated with composer Angelo Badalamenti on a different tune that’s sung by Julee Cruise in that movie. A few years later, Badalamenti penned Twin Peaks’ now-iconic themes, while Cruise popped up as the ethereal bar chanteuse at the Roadhouse.

Read all 11 facts over at io9 or by clicking HERE