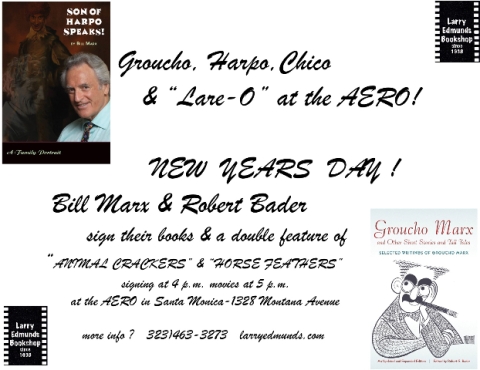 New Years Day 2012, the Aero Theater in Santa Monica (1328 Montana Ave.) will be screening a double feature of Animal Crackers and Horse Feathers at 5pm. However, if you come to the lobby at 4pm, you can get autographs from Robert S. Bader, the editor of Groucho Marx and Other Short Stories and Tall Tales AND Bill Marx (the son of Harpo Marx), author of Son of Harpo Speaks! Books on sale by Larry Edmunds Bookshop in the theater lobby.

Groucho Marx was a comic genius who starred on stage and in film, radio, and television. But he was also a gifted writer – the author of a play, two screenplays, seven books, and over 100 articles and essays. This newly expanded collection presents the best of Groucho’s short comic pieces, written over a period of more than fifty years between 1919 and 1973 for theNew York Times, the New Yorker, the Saturday Evening Post, Variety, the Hollywood Reporter, and other newspapers and magazines.
Available from Applause Books and booksellers nationwide.

Bill Marx is the last living person to have worked professionally with the three Marx Brothers, his uncles Chico and Groucho and his father, Harpo Marx. Because Chico and Groucho had siblings that had written about them, Bill Marx wanted to complete the Marx Brothers’ literary trifecta by authoring a book about the personal and professional relationships that he had with his father. Available from Applause Books and booksellers nationwide.